You are here: Home / Dumb + Dumberer / Man Admits Shooting Bald Eagle Because It Ate Fish From His Pond 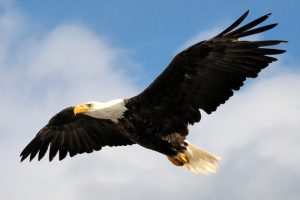 A Virginia man pleaded guilty to shooting a bald eagle and running it over repeatedly with an ATV because he was angry the bird had been taking fish from a pond on his property.

Allen H. Thacker, 62, of Smithfield, Virginia, had been spotted by an eyewitness in March running over the eagle three or four times with his red all-terrain vehicle, federal prosecutors said.

The witness immediately contacted Virginia wildlife authorities. They eventually tracked Thacker down and he admitted shooting the bird because it had been hunting small prey and fish from his property.

Despite the bird being a symbol of America, Thacker said he was angry because of all the time and effort he had put into stocking his property for use by his friends. Thacker also told officials that he thought too much emphasis was placed on protecting eagles and that they are menace, prosecutors said. He said most of his friends agreed with him.

Thacker said he initially fired a warning shot at the bird from a .22 caliber rifle, but when that failed to scare the bird away, he shot it out of the sky. He then said he used a pistol to finish the bird off before running over it repeatedly.

A necropsy showed that the eagle — a young male in good health — likely would have been able to survive the initial gunshot wound and that the cause of death was blunt force trauma to the head caused by the ATV. There was no evidence that Thacker had shot the bird a second time with a pistol as he said, prosecutors said.

He faces up to a year in prison and a $100,000 fine when he is sentenced in October, officials said.