You are here: Home / District of Columbia / Man Begs for Change to Buy Gas for His $245K Ferrari 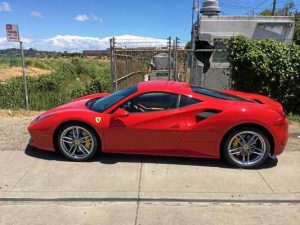 SAN RAFAEL, California — He spent so much on the new Ferrari he had no money left over to buy gas … or so he said.

Police in San Rafael, California say 36-year-old Rocky Jimenez, of Georgia was begging for gas money at a gas station with his Ferrari 488 GTB standing nearby.

Passersby say Jimenez was acting strangely, with witnesses saying he poured gasoline on the $245,000 car and that he hassled people as they came and went.

Jimenez told cops the car was his, but that it had been in the shop for the past two year and that he had only just gotten it back.

Police were skeptical as Jimenez gave increasingly vague answers to questions. When he allowed the officers to look into his bag, they found the key to the car but no papers for it. They also found the keys to another Ferrari.  A call to area dealers revealed that the car Jimenez was driving had indeed been stolen.

He was charged with vehicle theft, possession of a controlled substance and possession of stolen property. Officers also found property in his car linked to a burglary from two days earlier. They are looking to see if Jimenez may have been involved with other unsolved burglaries.