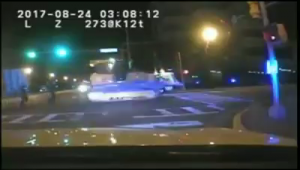 KANKAKEE, Illinois — He was set on making his getaway no matter how long it took.

An Illinois man led cops on a wild, slow-speed chase after stealing a 20-ton bulldozer, smashing a patrol car beneath its treads and narrowly avoiding crushing an officer.

Austin White, 18, was arrested on August 24 in the bizarre incident but dashcam video of the episode just surfaced this week, following a Freedom of Information Act request by WLS-TV.

Police say White stole the giant vehicle from a construction site in the middle of the night and was goofing around when cops began arriving at the scene. He then bolts, going 12 blocks through city streets, traveling just 5 miles per hour.

In the video, White can be seen driving the multi-ton truck over an approaching patrol car whose driver hopped out just in time.

Officers can be seen throughout the episode giving chase on foot.Eventually they managed to pull White from the vehicle and toss him to the ground. They were forced to use a Taser to subdue before hauling him in. 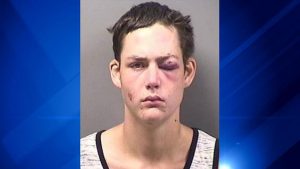 Austin White after cops had enough to do with him

He is being held on six felony counts of attempted murder and driving under the influence of drugs. Police say White has never had a driver’s license.