You are here: Home / Featured Story / Man who Plotted to Kill Obama for ISIS Sentenced to 30 Years 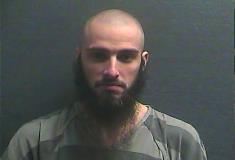 CINCINNATI — A man who plotted to bomb the Capitol Building and kill President Obama in the name of the Islamic State during the 2015 State of the Union has been sentenced to 30 years in prison.

Christopher Lee Cornell, 22, of Green Township, Ohio, had plotted for six months, researching weapons, bomb making, and the locations and layouts of the U.S. Capitol and other Washington D.C. buildings for a planned strike on Jan. 20, 2015, federal authorities said.

His chilling plan was to kill as many officers and employees of the United States as possible. Cornell acquired two semi-automatic rifles and approximately 600 rounds of ammunition for the job.

The FBI caught wind of Cornell in 2014 when he began expressing support for ISIS on social media, talking about waging “jihad under our own orders,” and celebrating beheadings and terror attacks. He eventually began plotting the DC attack with another person who turned out to be an informant.

“Cornell plotted to commit violence as a symbolic attack on the United States as a whole.  An attempt to murder another individual is horrific enough and justifies a significant sentence.  But this was more than that.  Cornell wanted to inflict pain on the spirit of the entire country, and terrorize its leadership,” said Southern Ohio U.S. Attorney Benjamin Glassman.

After being detained, Cornell continued posting statements online using prison computers that called for others to join him in violent jihad against the United States and its citizens on behalf of ISIS. He also published details identifying the informant with whom he had plotted.

In a jailhouse interview following his arrest, Cornell told WXIX-TV that he planned the attack because of what he said was U.S. aggression against Muslims overseas.

“I’m with the Islamic State,” he told the station. “I’m very dedicated to establish the Sharia in America, to wage war on the kafr (an Islamic term for ‘unbeliever’) and raise the word of Allah above all.”

“I’m so dedicated that I risked my whole life,” he said.

As his sentencing approached, his lawyers said argued that Cornell had “lived a fantasy life behind a computer screen,” and had reassessed his life while in prison. In a letter submitted to the judge, Cornell wrote: “I’m not a terrorist, a criminal or a bad person, I’m just a kid who suffered from problems, that made some bad decisions and stupid mistakes.”

But after being sentenced, he called the court a “rigged” system, and that “Allah’s in control, not the judge.”