You are here: Home / Colorado / Man Sets House on Fire After Roommate Drew Penis on His Face While He Slept 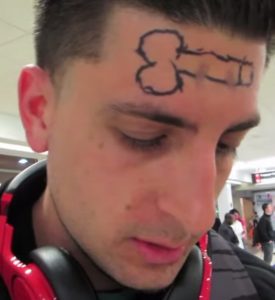 A man, like this one, who had a penis drawn on his face decided to torch home with roommates knew him

A Colorado man was arrested after angrily setting fire in the garage of the house he shared after a roommate drew a penis on his face while he was passed out drunk, cops say.

Stephen Elmore, 25, said he was infuriated when he woke up to find the phallic picture on his face and was just lashing out when he set a pile of sneakers on fire in the garage.

“I asked Elmore what started (the fire), and he said, ‘It was just like by her … drawing penises on my face,'” a Snowmass Village police officer wrote in the affidavit, according to the Aspen Times. “I asked Elmore if he was just really pissed off and he said, ‘Yeah come on man … this is bullshit.'”

Cops and firefighters were called to house late Saturday, but when they arrived the roommates had managed to out the fire out after it had charred the garage ceiling and several boxes and other items.

Elmore’s roommates said they had all been drinking when he passed out, police said. That’s when the homeowner scrawled the crude image on his face. When he woke up, he confronted one roommate before disappearing. Soon after, Elmore’s housemates smelled smoke.

“Elmore told me, ‘Can’t you just work with me, bro? I was thinking irrationally,'” the affidavit stated. “I had no intention of burning down the house or anything. If we could just put this in the past, I would really appreciate it.”