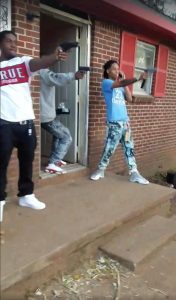 This gang made it a bit too easy for cops

HUNTSVILLE, Alabama — A mannequin challenge clip featuring a gang of gun-wielding dopes ended with two men getting arrested and Alabama cops seizing a cache of drugs and guns after the video went viral.

The video, which was shot on Nov.9, features several armed men standing still in poses as if they were engaged in a pitched gun battle in front of a home in Huntsville. When the video spread like wildfire on Facebook, it drew the attention of police.

A raid of the house uncovered two handguns, an assault rifle and a shotgun as well as a bullet-proof vest and a cache of bullets and magazines, the Madison County sheriff said. Cops also found several bags of marijuana packaged up to be sold as well as scales and other drug equipment.

The mannequin challenge is a viral video trend in which a group of people stand frozen like statues in a pose while someone walks through the scene filming with a camera. Numerous athletes and celebrities have taken part, but this is the first arrest believed to have stemmed from such a video.