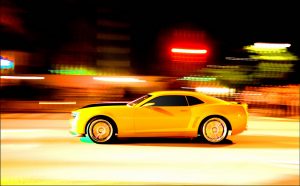 Officers took pity on the teen speeding home in a Camaro, although it’s unclear if his parents will be as forgiving

SPRINGFIELD TOWNSHIP, Michigan — At least his heart was in the right place.

A dopey Michigan teen was arrested after being caught driving 138-miles-per-hour, telling cops he was racing home because he was late for curfew.

The Michigan State Police say the 17-year-old — whose name they did not release — was zooming along I-75 outside of Detroit in an orange 2012 Chevy Camaro at 8:45 on Nov. 23 in a bid to get home to Grand Blanc before it was too late.

“The driver, 17 years old, stated that he was traveling so fast and passing other cars and ducking in and out of lanes because he was late for his 9:30 p.m. curfew,” police said.

Feeling bad for the teen, “the trooper gave the kid a break on the reckless driving charge, but he did earn a ticket for 138/70 and the SMH [smack my head] award.”

The department said the teen will receive four points on his license which will result in increased insurance rates and fines of at least $180.00. A reckless driving charge would have resulted in the teen being arrested and facing as much as 93 days in jail.

The officer opted to show the kid some leniency because he is “already in a lot of trouble with mom and dad.”

“Your troopers see all kinds of things during their shift. We give them the discretion to handle all situations. If you have to be somewhere at a certain time, leave early. Slow down and drive Michigan Safely!” the department said.