You are here: Home / Featured Story Right / We’re On a Mission From God: Fire Erupts at Jail Featured in ‘The Blues Brothers’ 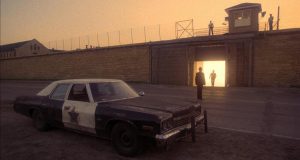 Elwood and Jake begin their mission from God

JOLIET, Illinois — The prison featured in the opening scenes of the cult classic film, “The Blues Brothers,” was heavily damaged when a fire erupted in an old industrial building on the grounds of the abandoned jail.

The fire at the old Joilet Correctional Center broke out Monday evening and was brought under control after a few hours. No one was injured in the blaze, officials said.

The cause of the fire was not immediately clear, fire officials said. Two people found leaving the grounds of the prison were taken in for questioning and told authorities that other people had been in the complex before the blaze, the Joliet Herald-News reported.

Opened in 1858, the prison was closed in 2002 and was most famous for its cameo appearance in the 1980 film when Elwood Blues, played by Dan Aykroyd, picks up his brother Jake, portrayed by John Belushi, in order to get the band back together following a stint in prison. 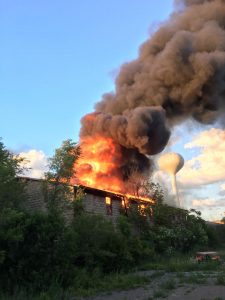 The jail also appeared in the Fox series “Prison Break” and in the Bob Odenkirk comedy, “Let’s Go To Prison.”

But its role in the opening sequence of “The Blues Brothers” made it a tourist destination of sorts, and visitors to Joliet would often visit the abandoned jail to pose for photos.

In 2013, a fire at the complex destroyed a warehouse building after which officials welded shut the gates leading into the jail to keep vagrants out. In 2009, a prison parking lot was transformed into a public park.