You are here: Home / Hard Boiled News Around the World / MMA Fighter Wanted in Beating Death of Bodybuilder in Russian Street Brawl

KHABAROVSK, Russia — Authorities in Russia have launched nationwide manhunt for an MMA fighter who beat a world champion powerlifter to death in a shocking street fight.

Security camera footage showed Anar Allakhveranov, 25, deliver a vicious roundhouse kick to 32-year-old Andrey Drachyov’s head, sending him tumbling to the ground in the street brawl on Sunday in the Far Eastern city of Khabarovsk.

Allakhveranov then repeatedly punched the much larger Drachyov in the face as he laid motionless on the ground outside a cafe until bystanders pulled him away.

Russian investigators said the fight was sparked by an argument over whose sport was better, with Drachyov dismissing MMA as nothing more than gymnastics. Allakhveranov allegedly replied that just because Drachyov was “a mountain of muscles” it didn’t mean he could fight.

Drachyov died at a hospital from a head injury soon after the fight, police said. Allakhveranov fled and has been on the lam since. 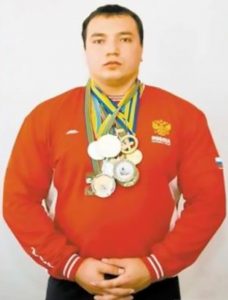 Yury Ustinov, who heads Russia’s powerlifting organization, told the R-Sport news agency that “a powerlifter is not always a fighter. Besides the times of fair fights are far gone.”

Drachyov was the junior powerlifting world champion in 2008 and took the silver world championship medal at senior level in 2011. He had recently switched to bodybuilding, and had won the Far Eastern Federal District Cup earlier this year.

Police say Allakhveranov will be charged with murder when he is caught and faces 20-years-to-life in prison if convicted.

Russian wrestling champ, Yury Vlasko, was killed earlier this month when he was stabbed during a brawl with local thugs near Lake Baikal.