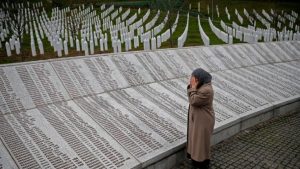 CHARLOTTE, North Carolina — A Serbian man who came to the U.S. in the 1990s as a refugee from the bloody Balkan wars, has been sentenced to 18 months in prison for lying about his role in one of the war’s most brutal massacres.

Milan Trisic, 55, admitted that he was a member of the feared Bratunac Brigade during the war in Bosnia and Herzogovina and took part in the bloody Srebrenica massacre in 1995 in which up to 8,000 Muslim men and boys were summarily executed.

The killings are considered the worst war atrocity in Europe since World War II, and late last year, former Serbian general, Ratko Miladic, was found guilty by a U.N. tribunal of genocide and crimes against humanity for commanding the slaughter at Srebrenica and the siege of Sarajevo. He was sentenced to life in prison.

When Trisic applied for refugee status, prosecutors say he claimed to have lived in Serbia during the war, hiding the fact that he was involved in arresting and beating thousands of  Muslim prisoners and transporting them to be killed and buried in mass graves.

Once he moved to the United States, Trisic settled in Charlotte, North Carolina, where he became a truck driver and raised a family. He eventually obtained a green card by similarly lying about his wartime activities on his application.

“Those who wish to live in the United States ought to respect our laws, support our national security, and pursue residency legally and honestly.  Anything less is inexcusable,” said U.S. Attorney General Jeff Sessions.

Trisic will be deported back to Serbia upon completion of his sentence. It is unclear if he will face war crimes charges upon his return to his homeland.