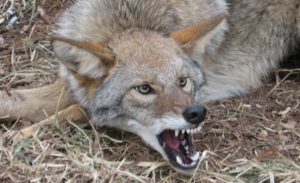 SADDLE RIVER, New Jersey — Cops are on the hunt for a pack of wild-eyed, killer coyotes that surrounded a woman and nearly tore apart her dog in a sinister suburban standoff.

Cops say the woman had been walking her dog down a suburban street when a pack of about five snarling coyotes began circling around them. They eventually came within six feet of the woman and her pooch.

They only gave up their pursuit when a passing motorist began honking his horn, scaring the beasts away.

Animal control officials have suggested residents consider carrying a compressed air horn or a walking stick to fend off any similar encounters.