You are here: Home / Drunk + Stoned / Naked Man in Tree Says He Can’t Come Down Because ‘Witches Are After Me’ 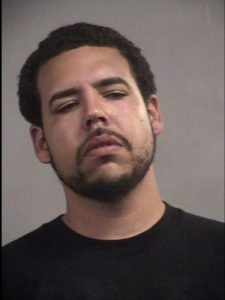 Corey Edelen is afraid of witches

A Kentucky man found naked in a tree by cops investigating a series of home invasions insisted he couldn’t come down because “witches were after him,” police said.

Corey J. Edelen, 30, of Louisville, was was sweaty, bleeding and “appeared to be intoxicated on drugs,” in addition to having no clothes on, said the cops who found him, according to the Louisville Courier Journal.

Shortly afterwards, officers found Edelen naked in a tree outside the woman’s house.

He refused orders to come down, so officers restrained him and pulled him down by force. While be treated by paramedics, cops say Edelen spat blood at one worker.

As it turns out, Edelen had been under house arrest and had removed his ankle monitor and gone out, triggering an alarm with the city’s department of corrections.

He was charged with burglary, indecent exposure, public intoxication, third-degree assault, escape and tampering with a prisoner monitoring device.