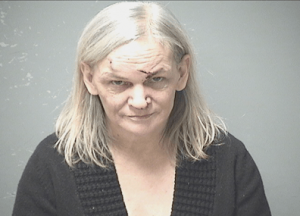 MANCHESTER, New Hampshire — A New Hampshire woman was busted after “an evening of sword play gone wrong,” when she hit a cop trying to show off some sword tricks.

Manchester police say they were called to 51-year-old Lisa Bunker’s home after she accidentally slashed herself on the face while performing sword tricks Monday evening.

Cops say Bunker’s 37-year-old husband had tried to get the sword away from her so she wouldn’t hurt herself further and had cut both his hands in the process.

While Officer Jason Feliciano spoke with about what had happened, she allegedly began demonstrating her “sword tricks” even though she did not have the sword in her hands. As a  result, she ended up striking the officer in the face with her hands.

When officers decided to put her into custody, they say Bunker began cursing at them and resisting arrest by curling up into a ball on the floor and laying on top of her hands.

After they managed to slap the cuffs on her, they say she refused medical attention for the cuts on her face, so they took her to jail. A search of her home turned up the sword in her bedroom.

She was charged with assault, reckless conduct and resisting arrest and was held on $1,500 bond.