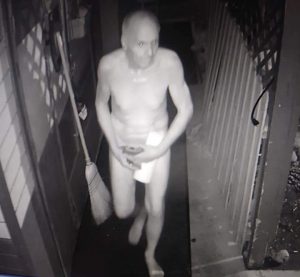 The nude man just wanted a place to hang out

ST. PETERSBURG, Florida — If Florida is a magnet for crazy, this place must be the epicenter.

Florida cops investigating a break-in at a St.Petersburg eatery were surprised to discover a second, nude burglary episode at the same place as they looked further back at the surveillance tape.

While the initial thief just helped himself to a plate of chicken wings and a beer, the second break-in artist stripped nude, ate a bowl of ramen noodles he had brought and then beat on a bongo drum.

Police say a closer review of surveillance video showed a man ride his bike up to The Chattaway restaurant last week, slip through the back gate and go through a storage shed.

The man then gets into a restaurant bathroom and exits stark naked.

He then sat naked at a picnic tables and began chowing down on a meal of Maruchan Instant Lunch ramen. The video also shows him playing the bongos, while still naked.

“He came in with pants on but he rode off on the bike without pants,” Chattaway server Chad Pearson told the Tampa Bay Times. “I’m not sure if he took his pants with him but we didn’t find them. We still don’t know where his pants are.”

The intruder also spray-painted a few chairs, the bongos and a pickle jar, but no one noticed until they checked the tape.

“We would not have known about the naked guy without the cop finding that video,” said manager Amanda Kitto.

Police identified the man, who is homeless, but did not release his name publicly. Kitto declined to give his name and said the restaurant will not press charges because he caused no harm.

Police still haven’t caught the other suspect who made off with about $500 worth of stuff.

Kitto said that even though the two incidents happened back-to-back, she does not believe they are connected.

“I used to always joke and say that if you were going to break into The Chattaway to make sure to grab a beer. And it finally happened.”