You are here: Home / Creepy / Nude Man with Electrode on Junk Roams Florida 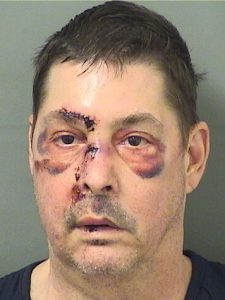 BOYNTON BEACH, Florida — This creep was hot to trot.

A strange Florida fetishist was busted for driving nude through a community filled with kids with a contraption with wires sticking out of it attached to his genitals.

Boynton Beach police say 56-year-old Kurt Allen Jenkins drove his Toyota four door slowly through the neighborhood on the afternoon of Halloween when he approached a man and pointed to his penis.

“He gestured at the victim to look down towards his groin area where the victim observed an electronic device with wires attached to Jenkins penis,” the police report read.

The man “turned down Jenkin’s advances” and called cops.

When police arrived, they say Jenkins ignored their commands to so he “was taken to the ground and placed into custody.

Jenkins was charged with lascivious exhibition, exposure of sexual organs and resisting arrest.