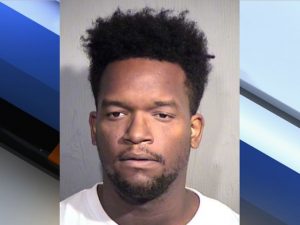 TEMPE, Arizona — What a considerate criminal.

An Arizona man who allegedly forced his way into his neighbor’s home while naked and then attacked the people living there, later sent the family a fruit basket to apologize.

Problem for Desmond Michael Drakes, 28, is that by sending the basket, he violated the restraining order the family had gotten against him after the initial assault,

Police in Tempe say Drakes broke into his neighbor’s home on Oct. 23 while naked and allegedly fought with the residents inside, KNXV-TV reported.

Drakes is accused of punching and kicking a teenager in the home and attacking an adult woman, before kicking holes through a large section of drywall.

When cops arrived, they found Drakes at his home next door where he resisted arrest until officers used a Taser to subdue him.

While in custody, Drakes was given a restraining order barring him from harassing the family next door. Drakes violated the order by sending the fruit basket, authorities said.

Drakes later told police he sent the basket as a way to apologize. He has been charged with indecent exposure and criminal trespassing.