You are here: Home / Creepy / Nude Thief Busted in a String of In-The-Buff Burglaries in Arizona 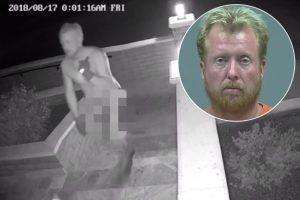 FLORENCE, Arizona — A naked man caught on video stealing from neighbors’ homes has been arrested and charged in at least five burglaries, authorities said.

Jeremy Lawrence, 47, of Florence, Arizona, was busted last week after several victims provided surveillance video from their homes to the Pinal County Sheriff’s Office in connection with the bizarre series of in-the-buff break-ins.

Investigators were first tipped off to Lawrence after getting a call on Nov. 11 from a man who noticed an exotic tree was missing from his property. He said he suspected Lawrence was the thief and that he may have also been responsible for stealing items from another neighbor’s home the night before, deputies said.

Lawrence also was spotted on a surveillance camera on Nov. 10 while wearing a camouflage hunting suit. Deputies said he stole 25 air conditioner evaporator coils and a radiator belonging to a vintage truck.

After noticing similarities in the cases, deputies linked Lawrence to an incident from August when a suspect — who was nude, except for shoes and gloves — stole plants from a home in Florence. Deputies say the thief sported a distinguishing tattoo on his right shoulder, which later helped investigators connect Lawrence to two more burglaries in 2016.

Deputies said the suspect in those incidents was caught on surveillance cameras without a shirt, allowing investigators to recognize the identifiable tattoo, deputies said.

A search of Lawrence’s home on Friday resulted in the recovery of most of the stolen property from two of the burglaries. Cops say they also found a marijuana grow operation with more than 26 plants on Lawrence’s property.

Lawrence is facing multiple counts of burglary, as well as possession of marijuana, possession for sale and other charges. Deputies said they expect more charges to be filed against Lawrence as they continue to investigate.