You are here: Home / STORY OF THE DAY / Ohio Veteran Sets Self on Fire in Trump Protest 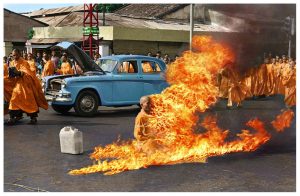 AKRON, Ohio — An unhinged Ohio man dressed in a Marine uniform doused himself in gasoline and set himself on fire as he ranted about the need to protest president-elect Donald Trump.

The shocking self-immolation occurred Saturday in a residential neighborhood of Akron where days earlier hundreds gathered for an anti-Trump protest, the Akron Beacon Journal reported.

Police say the 69-year-old man, whose name has not been released, was hospitalized with severe burns and it was unclear if he would survive. A passerby used his coat to help put the flames out.

Witnesses told the paper that the man walked into the Angel Falls Coffee shop that morning asking if anyone knew who had organized the protest earlier that week. When patrons said they didn’t know, the man grew agitated.

“For less than a second, he was calm,” patron Denise Bowman told the paper. “But then he became agitated. His tone changed, his body language changed and he got loud.”

He began a rant about giving blood for his country and listed places where he said he served. When his language became vulgar, he was asked to leave.

Out on the street, witnesses said he asked a man to take his photo with his phone. He then pulled a gasoline canister from his car and poured it over his head and set himself on fire.

As the man collapsed to the ground, the passerby tried to put the flames out using his coat and people from a nearby apartment complex ran out with fire extinguishers.

“He had been wearing cloth gloves and they were burned off,” Jim King, the co-owner of Angel Falls told the paper. “Part of his clothes burned away, too.”

Bowman said news of the protests across the country worried her.

“And now that I’ve seen this, a suicide attempt with a veteran. I’m scared,” she said. “I don’t know what’s going to happen next,” she said.  “All I can say is God help us and help Trump, too. God help our country.”