You are here: Home / Bias Crimes / Oklahoma Top Cop Resigns After Being Tied to Neo-Nazi Organizations 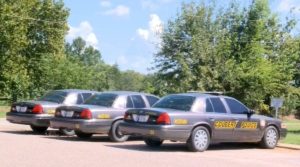 COLBERT, Oklahoma — The interim police chief in a small town on the Oklahoma-Texas border has resigned after a local TV station reported that he appeared to have ties to neo-Nazi organizations.

Bart Alsbrook had been a reserve police officer in Colbert until being named interim chief last week.

But news station KXII-TV reported soon after that a Bart Alsbrook showed up in records as the owner of two websites, ISD Records and NS88 Videos, that sell neo-Nazi paraphernalia, like such as music by “The Klansmen,” and Nazi patches.

The Southern Poverty Law Center, has listed both sites as connected to hate groups. The Center also listed him as the Texas coordinator of Blood & Honour USA, a racist skinhead gang.

When contacted by the Tulsa World newspaper, Alsbrook insisted that someone had stolen his identity and that he was not responsible for the websites.

“Someone has been using my name for years on the Internet in regards to racist topics. It’s not me, rather someone who has hijacked my name due to my combativeness and rejection to white power skinheads who were always coming to the heavy metal shows, starting fights and messing up our scene,” he said. “We hate each other. They use my name in all sorts of things.”

But within hours of being contacted by the local TV station, both web sites tied to Alsbrook were taken down.