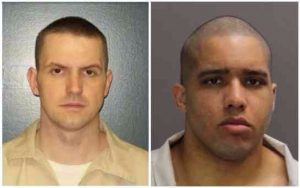 COLUMBIA, South Carolina — Two convicts serving life sentences for murder were charged with systematically slaying four fellow inmates by luring them one-by-one into a cell and beating and strangling them to death.

The shocking killings occurred Friday at the Kirkland Correctional Institution in South Carolina. Investigators said the brutal killers, identified as Denver Simmons and Jacob Philip, made quick work of their victims, killing them all one-at-a-time in just 30 minutes.

Police did not publicly state why they thought the two men acted with such calculated brutality, but say they both admitted luring the victims into a cell, choking them with a garrotte and beating some with a broomstick and stabbing them with the broken pieces.

The mother of one of the victim’s says she was told by the prison chaplain that the two alleged killers ssid they targeted other inmates they thought were weak.

A police report said that the events leading up to the killings were partially captured by surveillance camera. Prison officials said they had begun a review to see if any procedures for handling inmates had broken down.

Simmons, 35, has been jailed since 2007 for killing a woman he knew, then getting her 13-year-old son from school and killing him too.

Philip, 25, similarly strangled his girlfriend and her 8-year-old daughter and has been jailed since 2013.

From L to R: King, Kelley, Ham and Scruggs