You are here: Home / Dumb + Dumberer / Psychic Pleads Guilty to Tax Fraud in Bilking Elderly Woman Out of $3.5 Million 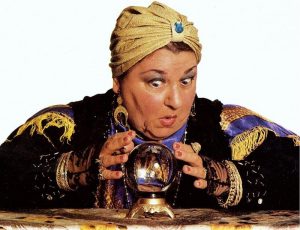 BOSTON —  Surely she should have seen the tax man coming.

A predatory psychic who bilked an elderly Martha’s Vineyard woman out of $3.5 million in order to rid her of demons, has pleaded guilty to tax evasion.

Sally Ann Johnson, 41, swooped into the victim’s life in 2007 and convinced to pay top dollar for repeated spiritual cleansing ceremonies, exorcisms and healing services over the next seven years. At times, Johnson even lived with the victim.

But what ultimately landed Johnson in the dock was the lengths she went to in order to obscure the payments the victim made to her so that the IRS wouldn’t pick up on it.

Prosecutors say Johnson used an alias and directed that payments be sent to at least three different bank accounts connected to her, including an account in another person’s name. Johnson would then withdrew large amounts in cash.

She also ran up huge credit card bills on accounts in the victim’s name and had her pay the bill in lieu of paying directly for her services.

Prosecutors say the whole subterfuge was designed to conceal Johnson’s income from the IRS and that, in fact, she never paid a dime in tax on the $3.5 million.

Johnson pleaded guilty to interfering with the administration of the Internal Revenue laws and had agreed to pay $3,567,3000 back to the victim as well as pay back taxes. Sentencing was scheduled for Jan. 17, 2018.