You are here: Home / Crazy / Family Charged in Woman’s Slay They Blamed on Phony Homeless Man 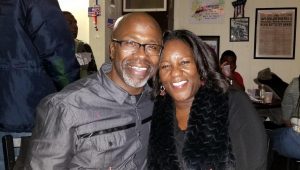 BALTIMORE — The slaying of woman whose family claimed she had been stabbed by an aggressive panhandler, took a shocking turn when police arrested her relatives who they say made up the story to cover up their role in her death.

Jacquelyn Smith’s murder in December in Baltimore, purportedly by a man asking for change, drew national attention about the plight and dangers of the homeless in the United States.

Just days after the stabbing, Jacquelyn’s husband, Keith, and stepdaughter, Valeria, held a tearful press conference in which they blamed her death on a man who approached their car after she gave money to a woman begging in the rain with a baby. They said the man came up to the car under the guise of thanking Jacquelyn, then reached into the car and snatched her necklace and pocketbook, stabbing her in the process.

But now police say their story was bogus and are charging Keith and Valeria with first-degree murder. The paid were picked up at the U.S.-Mexico border while trying to flee the country, the Baltimore police said.

“The information and evidence points it wasn’t a panhandler,” acting Baltimore Police Commissioner Michael Harrison said. “People take advantage of Baltimore. We want to make sure the truth comes out and justice is done.”

Other family members told the Baltimore Sun that they doubted Keith and Valeria’s story from the start and had eyed him as being responsible.

The case drew national attention, causing some — including Oprah Winfrey — to express concern about giving money to panhandlers.

Baltimore State’s Attorney Marilyn Mosby said the Smiths exploited the city and its violence. Smith’s death was one of more than 300 in Baltimore in 2018.