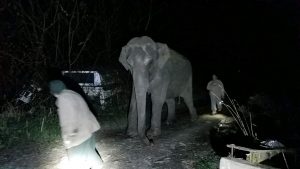 Police in a small town outside of New York City were surprised to receive a call about a plodding pachyderm wandering around the streets late Sunday.

“Never a dull moment in Troop F,” the unit of the New York State Police posted on its Facebook page.

The elephant, a 46-year-old female named Fritha, had escaped from a nearby animal sanctuary where it has lived much of her life. The owners of the Sanctuary for Animals say Fritha hails from Vietnam and came to the U.S. after the Vietnamese War where she suffered burns from a napalm bomb.

The sanctuary says Fritha got away simply because an employee forgot to turn on the electric fence that keeps her in at night.

Other animals at the sanctuary include camels, zebras, horses and cows.