You are here: Home / Dumb + Dumberer / 3 Hurt in Sale of Dead Explosive Hobbyist’s Home After Device Goes Off 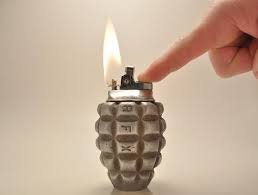 Three people were injured during an open house for a home for sale in Kentucky, when a visitor unknowingly triggered an improvised explosive device.

Lexington Police say the home’s owner — who recently died — was an explosives hobbyist and left the house littered with materials used in building bombs.

The people were injured on Friday morning when a 33-year-old man inadvertently set off the explosive that had been made to look like a cigarette lighter. The man suffered serious injuries to his hand and upper body. Another man suffered a deep laceration to his leg and a woman was treated for what cops described as “concussion-like injuries.”

Two nearby homes were evacuated as investigators from the FBI, ATF and various police agencies in Kentucky combed the house.

After identifying various other explosives compounds, authorities detonated the material in a containment vessel.

Police say they do not believe the homeowner intentionally left the devices with the purpose of hurting anyone and that no charges were likely to be filed.