You are here: Home / Darwin Awards / Speeding Driver Killed in Collision With Elephant on Thailand Road 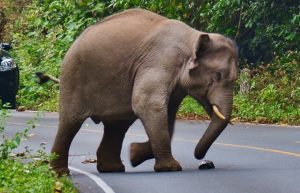 NAKHON RATCHASIMA, Thailand — A speeding driver was killed after he hit an elephant that then stomped his pickup flat, police said.

Officials in northeast Thailand said the vehicle plowed into the wild pachyderm’s hind legs as sun set at the edge of the Khao Yai National Park, police said.

The angry animal then reared up and crushed the vehicle, killing the driver, 58-year-old Nakharin Boonchai, the Bangkok Post reported.

“Elephants don’t come out during the day but they start coming out when it gets dark,” said Lt. Col. Kemchat Paedkaew, of the Thai police. He said up to two people a year are killed by elephants in areas surrounding the park.

The accident happened on Wednesday on a small road with signs telling drivers to be aware of wild animals that sometimes stray from the park. Locals reported that two elephants had been crossing the road at the time and that they tried to warn Boonchai — who was not from the area — to slow down, but he hit the rear animal as darkness fell. 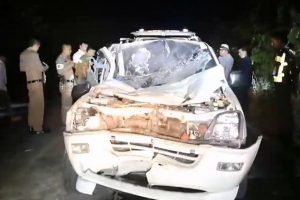 Officials tracked the stricken elephant, which was bleeding from one of its legs but still able to walk, and were monitoring its condition.