You are here: Home / Featured Story / Strongman Champ Known as ‘White Rhino’ Shoots Self as FBI Closes In

HAVERSTRAW, New York — A retired cop and strongman champion known as the “White Rhino” fatally shot himself in front of a school after being pulled over by FBI agents who were about to arrest him, authorities said.

Gerard Benderoth, 48, was about to be indicted on charges related to a quintuple homicide and drug conspiracy case brought by federal prosecutors in December against retired Westchester cop Nicholas Tartaglione, a bodybuilder and pal of Benderoth’s, the North Rockland Daily Voice reported.

As federal agents closed in to arrest Benderoth Wednesday morning and began tailing him with flashing lights, he pulled over near an elementary school, pulled out a gun and shot himself.

The FBI confirmed the episode, but declined to say why they had pulled Benderoth over and the nature of the charges he faced was not immediately clear.

Benderoth had been a cop for two decades, working as a New York City police officer until 2006 and then joining the force in the town of Haverstraw, about 35 miles north of the city. He retired two years ago.

But he had gained his greatest notoriety through his participation in strongman competitions where contestants exhibit feats of great strength, like carrying 450-pound boulders, pushing truck tires and pulling tractor trailers long distances. 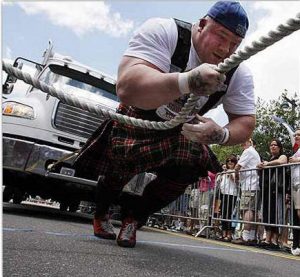 Weighing 360 pounds, the behemoth Benderoth was able to deadlift 800 pounds and lift 185 pounds with one arm. In 2004, he was ranked 10th as the strongest man in the world.

In December, federal prosecutors charged Tartaglione with the gangland slaying of four men as part of a cocaine deal gone wrong. They disappeared last April and their bodies were found in December on Tartaglione’s property.

A retired Briarcliff Manor police officer, Tartaglione could face the death penalty in the case.