You are here: Home / Virginia / Suicidal Teen Survives Leap From Overpass But Kills Driver Below 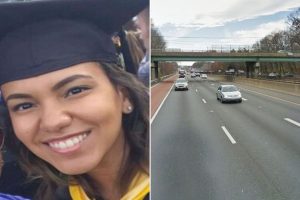 Marisa Harris was killed by the leaping teen

FAIRFAX, Virginia — A 12-year-old boy who leapt off a highway overpass in a suicide attempt, inadvertently killed a 22-year motorist passing underneath but somehow managed to survive the fall, cops said.

The car slammed into the guardrail after the fall, but cops Marisa Harris, a graduate student at Marymount University in Arlington, studying clinical counseling, was killed by the boy’s falling body, the Virginia State Police said.

The boy, who was not publicly identified, took the tumble off the Cedar Lane overpass late Saturday afternoon and landed directly on top of Harris’ Ford Escape. A 23-year-old passenger tried to seize the wheel but the vehicle anyway.

Harris was rushed to an area hospital but was declared dead on arrival. The teen who jumped was hospitalized with life threatening injuries.