You are here: Home / Creepy / Swinger Couple Charged With Assaulting Teen Girl in Sex Room in Their Home

GOODHUE, Minnesota — A pair of Minnesota swingers have been charged with sexually assaulting a 15-year-old girl repeatedly over several months in an adult toy-filled sex room they had hidden in their home.

Deputies executing a search warrant discovered a warren of electronically-locked rooms in the attic above their garage that were filled with sex toys, cameras, whips, chains and other bondage devices, the Red Wing Republican Eagle reported. 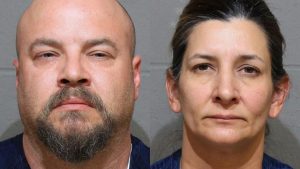 Investigators also found cats of lubrication, disinfectant wipes and evidence of cocaine and methamphetamine on several items in the house.

The couple told investigators they engaged in the swinger lifestyle, but Michael Germain denied having sex with the young girl. But a search of video found at the house turned up footage and photos of the girl engaged in sexual activity.