You are here: Home / Sad / Teen Who Killed Mom in Fight Over Pizza Delivery Gets 15 Years 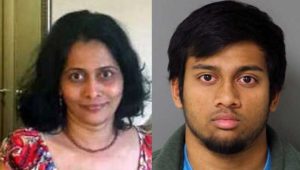 RALEIGH, North Carolina — A teen who killed his mother after getting into a fight with her over him ordering a pizza has been sentenced to 15 years in prison.

Arnav Uppalapati was 16-years-old when he strangled his strict 51-year-old mother in 2015 after she slapped him for ordering in the food to their home in Cary, North Carolina, authorities said.

“His mother was strict,” Assistant District Attorney Howard Cummings said, according to the Raleigh News Observer. “She wanted him to put his emphasis on his education. It was all just bottled up inside.”

Uppalapati then dragged Nalini Tellaprolu’s body into the garage and placed a plastic bag over her head. The following day, he called police saying he found his mother dead in the garage after he returned home from school.

It took cops a year to charge Uppalapati after they discovered his DNA on the tightly tied knot of the plastic bag.

The arrest shocked North Carolina’s Indian community, in which Tellaprolu, who worked at Duke Medical Center, was well known.

Now 19, Uppalapati will serve between 12 and 15 years in prison, a sentence officials described as “the absolute most lenient” considering his age and immaturity.