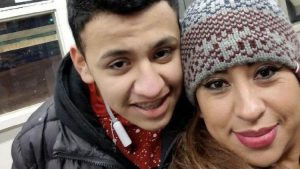 CHICAGO — A 15-year-old newspaper delivery boy saving money to buy a Christmas present for his mom, was shot and killed in what police think may have been a case of mistaken identity.

Paperboy Brian Jasso was helping his mother’s boyfriend deliver copies of the Chicago Tribune on the south side of the city Sunday morning when their car was rear-ended at a traffic light, police said.

The occupants of the car behind them then began shooting, firing numerous shots through the rear window of the delivery vehicle, striking Jasso in the back of the head and killing him, cops said.

Investigators said neither the boy nor the mother’s boyfriend had gang ties and it is believed the gunmen may have confused them for someone else.  Another theory is that it was a carjacking gone bad.

“I hope the person who did this sees this so they could know whose life they took,” the boy’s mother Carmen Manzano, told the Tribune. “He was a person who had dreams, he was a person who wasn’t doing wrong like they are doing bad things on the street.”

The family said the teen had been helping out to raise some extra money to buy his mother a present for Christmas and to be able to afford to take his girlfriend out on a date.