You are here: Home / New York / Teen Stabs Grandmother as She Sleeps, Steals $23 From Her Purse 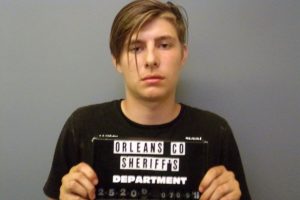 Brandon Foster is in deep trouble for stabbing his grandmother

ALBION, New York — What part about “love your grandmother,” didn’t he get?

An upstate New York teen has been charged with breaking into his grandmother’s house, stabbing and choking her, before stealing money from her purse.

Seventeen-year-old Brandon Foster’s attack on his grandmother, Rachael Spearance, early Sunday, triggered a massive manhunt that ended hours later when cops found the teen cowering in some bushes behind a Burger King.

Cops say that Foster forced his way into his grandmother’s house by climbing on a chair and forcing the window open. Once inside, he allegedly made his way to granny’s bedroom and attacked her with a knife as she slept.

Spearance began fighting back, so Foster placed her in a choke hold, cops said, according to the Batavia Daily News. But she managed to fight her way free and, despite bleeding profusely, drove to a local hospital.

The teen then stole $23 from her purse and fled the house, cops said.

Spearance  was taken by Mercy Flight to Erie County Medical Center and remains in serious but stable condition.

After searching for several hours, police dogs were able to track Foster, cornering him some bushed behind Burger King. He then surrendered peacefully.