You are here: Home / STORY OF THE DAY / Texas Teacher Pleads Guilty to Affair With 13-Year-Old Student 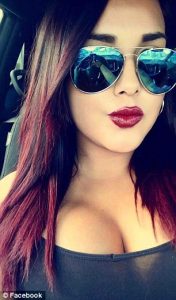 HOUSTON — A Texas middle school teacher who got pregnant from a long-running sexual relationship with a 13-year-old student has pleaded guilty to sexual assault of a child.

Alexandria Vera, 24, a former English teacher at Stovall Middle School in Houston, faces up to 30 years in prison but could end up being put on probation when she is sentenced by a judge in January.

Vera was originally charged with sexual abuse of a child when she was arrested in June, a charge that carried a maximum life sentence.

She admitted at the time to having sex on an “almost daily basis” with the 13-year-old student from Sept. 2015 to Jan. 2016, according to the criminal complaint.

Cops were called after Vega got pregnant

The woman said that in October, she met the boy’s parents and was introduced as his girlfriend to which they did not object. She said that some nights the boy would sleep at her house and that she would drive him back home in the morning so he could catch the school bus.

In January, Vera became pregnant with the student’s child and told investigators that his parents were initially happy and supportive. But in February, child protective services showed up the school and began questioning her about the relationship. She denied having an affair with the boy and being pregnant, but ended up having an abortion and ending the relationship.

In April, word of the affair reached school administrators and police were called in to investigate.

The boy, now 14, has been placed in foster care and will remain there until at least August 2017, KHOU-TV reported. His parents, who have three other children, were not charged in the case.