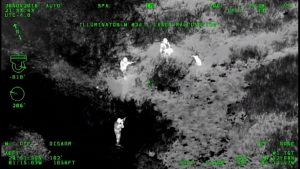 Cops Could See Where Torres Was All Along

DELTONA, Florida — Stupid is as stupid does.

A Florida man on the run from cops hopped into a pond and then told officers who found him that he was “just fishing” and the guy they were looking for had “gone that way.”

Sean Torres, 29, of Daytona Beach had tried to rob a nearby Family Dollar store on Nov. 27, walking in with his shirt on his head leaving the “loyalty” tattoo on his stomach in plain view and demanding cash, police said.

Sean Torres Thought He Could Talk His Way Out of Trouble

When the clerk said no, Torres allegedly threatened to shoot him and reached into the waistband of his shorts as if he had a gun, but then running out of the store into the night.

Cops were called and quickly responded with K-9 units and a helicopter as Torres fled into a swampy area near the store.

In an effort to hide from cops, Torres jumped into the pond and submerged his body, leaving only his face sticking out of the water. Little did he know, but the helicopter was equipped with a heat-imaging camera which detected where he was lying all along.

When officers approached and asked what he was doing there, Torres allegedly told them he was “just fishing” and that his pole was in the water. He then claimed that “the guy who did it went that way.”

He soon surrendered, saying he didn’t want to be bitten by the police dog. When he crawled out of the water, cops immediately noticed the “loyalty” tattoo on his stomach.

After being placed in the back of a Volusia County Sheriff’s office patrol car, Torres allegedly threw himself repeatedly against the interior of the vehicle, kicking doors and causing damage to the car.

Torres was charged with robbery and criminal mischief and was held on $30,500 bail.