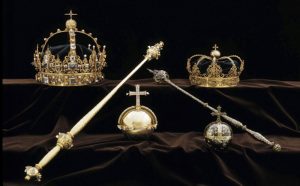 STRANGNAS, Sweden — Brazen thieves carrying out a daring daytime raid at a medieval Swedish cathedral, made off with priceless crown jewels and then made their escape by boat through a nearby series of lakes.

Two men sauntered into the Strangnas Cathedral about 40 miles east of Stockholm around  noon on Tuesday and smashed open a display case in front of stunned visitors.

They grabbed a gold crown and an orb dating to 1611 that were made for King Karl IX’s funeral, and a jewel-encrusted crown dating to 1625 that was used in Queen Kristina’s funeral. Breaking the glass on the display triggered an alarm, but the men quickly ran out of the cathedral

Outside, the men hopped aboard two bicycles and pedaled to a nearby lake where they vanished aboard a speedboat or on jet skis into the dizzying patchwork of lakes that surround the city, police said.

Police sent out a helicopter and boat to hunt for the thieves but were unable to locate suspects.

While the stolen artifacts are of great historic and cultural value, police said the stolen pieces would be “impossible to sell” because of their notoriety, according to the Swedish newspaper, Aftonbladet.

“It’s too difficult to assign a value to these things. They are so unique and historically significant,” said police spokesman, Thomas Agnevik.

The stolen artifacts are funeral regalia, which are placed inside or on top of a coffin to symbolize a deceased royal’s identity and social ranking.

While some funeral regalia are kept in the cathedrals of Strangnas, Uppsala and Vasteras, most of Sweden’s crown jewels are kept in vaults under the Royal Castle in Stockholm.

In 2013, 16th-century copies of King Johan III’s crown, orb and scepter were stolen from the cathedral in the central Swedish city of Vasteras, 60 miles west of Stockholm, during a nighttime burglary. They were eventually found and returned to the cathedral. No one was arrested.