You are here: Home / STORY OF THE DAY / TRAGIC SELFIE: All Smiles Seconds Before Sudden Death 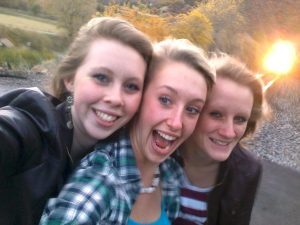 Kelsea Webster, Essa Ricker and Savannah Webster (l-r) were killed by the train right behind them moments after shooting this selfie

SPANISH FORK, Utah — Death was right behind them and they didn’t see it coming.

This tragic selfie captures the final moments before three Utah pals were fatally struck by a passing freight train.

The train is so close its headlight can be seen in the background of the photo bearing down on the smiling  girls.

The photo was published last week by railroad company Union Pacific, as part of a public service campaign warning people of the dangers of taking selfies too close to the tracks.

The girls had wandered down by the tracks in Spanish Fork Canyon to take picture of the passing trains. Moments before the tragedy, Savannah posted “Standing right by a train ahaha this is awesome!!!!” on her Facebook page.

But as the girls watched a westbound Utah Railway train pass by, they didn’t hear a second Union Pacific train coming towards them from the other direction until it was too late.

“We watched in horror as we got closer,” said conductor John Anderson. “We saw them for about 12 seconds until they disappeared from our sight and the train continued moving forward.”

Investigators believe the girls were struck by the one train and knocked into the other.

Union Pacific Engineer Michael Anderson said the episode haunts him to this day.

“What happened was very intense and I have to carry it the rest of my life,” he said.

Kelsea and Savannah Webster’s mother said she hoped that people would learn from her family’s tragedy that trains are dangerous.

“The accident that took my daughters’ lives was preventable and a good illustration of how close a train can be without hearing it,” she said. “No one should have to go through this and I hope people will seriously think about the campaign’s rail safety message and share it with their loved ones.”