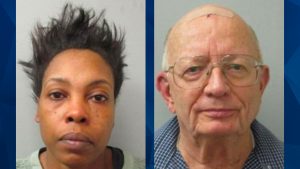 HUNTSVILLE, Alabama — The claws really came out in this one.

Two people were arrested after an argument over crab legs at a Chinese all-you-can-eat buffet boiled over into a full-scale rumble, police said.

“There’s a woman who’s beating a man. People are moving around, plates are shattering everywhere,” Huntsville police officer Gerald Johnson who was eating at the restaurant at the time told WHNT-TV.

He said people had been waiting for up to 20 minutes for more crab legs to be brought out at the Meteor Buffet and that all hell broke out once they arrived, with people accusing each other of cutting the line.

“It’s not something you typically hear, if you can imagine a fencing match,” Johnson said.

Police arrested John Chapman and Chequita Jenkins who was eating at the buffet with her kids.

“They’d been waiting there for the crab legs for a good 10, 20 minutes. When they finally came out, it’s very heated. Especially if someone is taking more than their fair share,” Johnson recounted.

Chapman is facing disorderly conduct, Jenkins is charged with third-degree assault. Both people could end up paying a few hundred dollars in fines, well above the $10.58 per plate charge at Meteor Buffet.