You are here: Home / Creepy / US Diplomat’s Hubby Sentenced to 2 ½ Years For Abusing Moroccan Servant 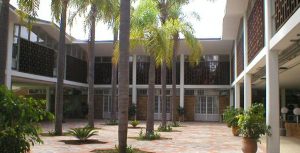 The U.S. embassy in Rabat, Morocco

WASHINGTON — The husband of a former high-ranking U.S. diplomat has been sentenced to 30 months in prison for sexually abusing a long-time household staffer at the state department-owned home where they resided while stationed in Morocco.

The abuse went on from 2010 until 2013 and escalated at times to Chammas making the woman massage his genitals. On several occasions, he tried unsuccessfully to physically force her to perform oral sex on him, federal prosecutors said.

The allegations came to the attention of special agents with the U.S. State Department in 2013 when they received an anonymous letter detailing the abuse.

In interviews with investigators, Chammas said he had only threatened to fire employees of the residence because he thought they were stealing. He admitted receiving massages from the household servant, but said it was for treatment of chronic pain he had in his hip. When asked if he had ever ejaculated during the massages, he said he could not recall but later said “maybe two times, three times, I don’t remember.”

Charges were finally brought against him in May 2016. 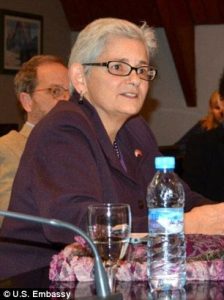 Chammas’ wife, Judith Chammas, served as the deputy chief to the U.S. mission in Morocco from 2010 until this year. She had previously served in Syria, Iraq, Yemen, Sri Lanka, Tunisia and Bangladesh.

Labib Chammas pleaded guilty in October to one count of abusive sexual assault. He has also been sentenced to a five-year term of supervised release and register as a sex offender for the next 15 years. He also was ordered to pay a $15,000 fine.