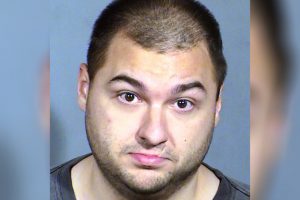 LAS VEGAS — A hammer-wielding lunatic was arrested in a Las Vegas police sting after attacking a mannequin staged to look like a sleeping homeless man by investigators trying to solve the recent beating deaths of two homeless men.

Police say they watched as Shane Schindler walked up to the dummy which had been covered with blankets on a sidewalk near where one of the homeless men was bludgeoned to death, pull out a 4-pound hammer out of Little Caesar’s Pizza bag and scan the area.

He then brought the hammer down several times on the dummy’s head, the Las Vegas Review-Journal reported. Police captured the beating on surveillance camera.

Schindler, 30, admits he struck the mannequin, but insists he knew it was not a real person all along.

“When close enough to strike his victim, Schindler removed the hammer from the bag then struck what he thought was a human being in the head with the hammer with the intent to kill,” the police report states. “The decoy mannequin was staged in a manner which would have made it impossible for Schindler to have determined the mannequin was not a human being before he struck. Schindler swung the hammer using both arms to generate maximum force to his blow.”

Police had set up the trap near where the two men had been beaten to death earlier this year.

Daniel Aldape, 46, was found dead with his body on the ground wrapped in blankets on Jan. 4 after having been struck “four or five times” on the head with a heavy object, police said. David Dunn, 60, was found dead a month later of head trauma at the same intersection, cops said.

At the time, cops said they had no leads, but hadn’t ruled out the possibility of “thrill kills,” which is why they staged the trap using a mannequin.

Schindler has so far been charged with carrying a concealed weapon, but the judge in the case ordered him held on $50,000 bond — 10 times the usual amount for such a charge.

His lawyer argued the figure was excessive and that Schindler insists he is innocent.