You are here: Home / Creepy / Woman Gets 7 Years in Hit-and-Run Rampage After DC Funk Parade 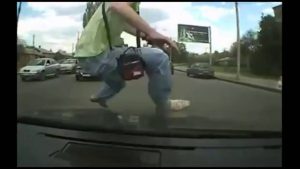 WASHINGTON — A woman responsible for a hit-and-run rampage in which she hit multiple people and cars following Washington, D.C.’s Funk Parade last year has been sentenced to seven years in prison, prosecutors said.

Donnie Bean, 49, was dead drunk and high on marijuana as well as suffering from unmedicated mental health issues when she climbed behind the wheel of her Honda Civic on May 7, 2016 just as the music and art festival was winding down.

Over the next 90 minutes she drove wildly through streets packed with Funk Parade-goers,  striking three people, including a cyclist and a 9-year-old girl, narrowly missing many others and hitting several cars, federal prosecutors said.

At one point, Bean nearly hit two people in a crosswalk and when one of them yelled at her, she replied, “You wanna make it real?” and then made a U-turn and drove back at them. They escaped only by dodging behind a traffic signal pole.

Later, she rear-ended a car and when the driver got out and told her not to leave, Bean backed up and accelerated toward him, flipping him over her car, prosecutors said.

After DC police officers spotted her driving erratically, they attempted to stop her, but she rammed a police car and fled. Police eventually were able to pen her car in and drag her out from behind the wheel.

In May, Bean pleaded guilty to three counts of assault with a dangerous weapon and one count of felony assault on a police officer.