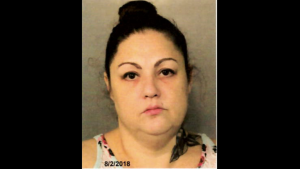 Johna Martinez-Meth lived up to her name

FAIRFIELD, California — What’s in a name?

A woman whose last name is Meth has been sentenced to two years for smuggling meth into a prison, killing an inmate who died after swallowing balloons containing the drugs, authorities said.

Johna Martinez-Meth, 46, of Clearlake, California, had been accused of sneaking the drugs to an inmate at a prison medical facility in Vacaville in May 2018, prison officials said,

The scheme was uncovered when the inmate,  Adrian Sepulveda, 46, who was serving a life sentence for murder, died, An autopsy showed he had swallowed several balloons filled with methamphetamine, officials said.

When investigators realized that Martinez-Meth was the last person to visit Sepulveda, they got a search warrant for her house where they found more meth, balloons and glue. She was arrested and later pleaded guilty to involuntary manslaughter.

“[The California Department of Corrections and Rehabilitation] is committed to stopping the flow of drugs into our prisons,” said Bryan Shill, deputy chief of CDCR’s Office of Correctional Safety. “Our investigators will diligently pursue those who smuggle narcotics into any state correctional facility, and we will seek justice through aggressive prosecution of violators.”