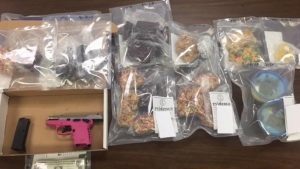 Ebony Cooper, 28, and Leah Presley, 26, were busted after the event for entrepreneurs at the church in Savannah, where Cooper had been selling baked goods, puddings and other treats laced with marijuana.

When agents with the Chatham-Savannah Counter Narcotics Team spotted the sale, they purchased several items from Cooper. They then followed her after she left and eventually pulled her and Presley over and searched their vehicle.

Inside, officers found a large amount of pot edibles plus $1,000 in cash and a loaded handgun, cops said.

Both women face felony drug charges, although cops say Presley didn’t appear to be involved in the sale at the church event. Officers also determined that Cooper had been actively hawking her wares online as well.

Police say the event at the church was run by an outside vendor, and that church officials appeared to have no knowledge of the drug dealing. The other vendors at the event all appeared to be involved in legal businesses, cops say.